An old oil lamp from the Cape Naturaliste Lighthouse. You can find it in near the keepers house.

Gulls are typically medium to large birds, usually grey or white, often with black markings on the head or wings. They typically have harsh wailing or squawking calls, stout, longish bills, and webbed feet. Most gulls, particularly Larus species, are ground-nestingcarnivores, which will take live food or scavenge opportunistically. Source: Wikipedia

A photograph I took of the Cape Naturaliste Light House today. An excerpt from Lighthouse.net The Cape Naturaliste tower, positioned on a 100 m high bluff overlooking Geographe Bay, was constructed in 1903 from local limestone, quarried about one mile from the lighthouse at what is known as the “Quarries”. Bullock wagons carted the stone…

The Easter weekend was an opportunity to get out and do some geocaching with the boys. We headed out Friday and stayed over night near Dinninup. A cache close by was hidden on a good example of agricultural art. Another example was found in Boyup Brook.

Dragged away from work today to visit the CapelFest. Harry was rather impressed with “Mater” from the movie “Cars”. 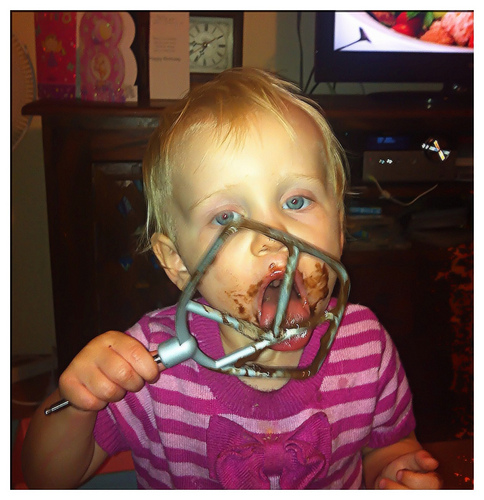 Denica enjoys the beater from the mixer.

While in Busselton today, I thought I’d record a Time Lapse using my iPhone 4. This is my first try and there are a few technical changes to make but I think it’s pretty cool.   I had to make a few edits. You just can’t keep everybody from walking in front of the camera….

Harry and Denica count shells they found at the beach near the Busselton Jetty from http://flic.kr/p/bzZL8g